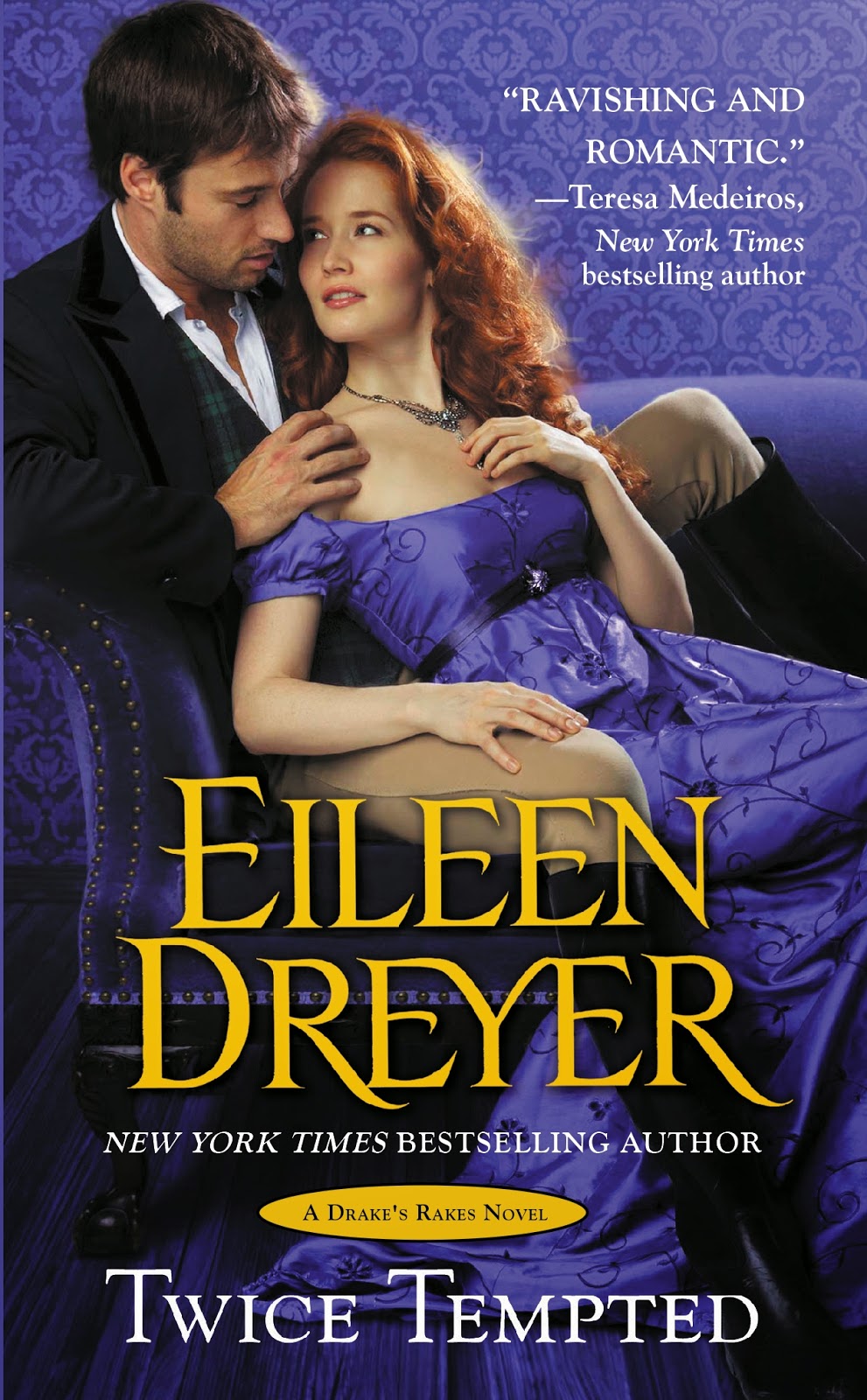 The fabulous Eileen Dreyer joins me today for a cozy chat to celebrate the release of TWICE TEMPTED.  From her bio,


A retired trauma nurse, Eileen lives in her native St. Louis with her husband, children, and large and noisy Irish family, of which she is the reluctant matriarch. She has animals but refuses to subject them to the limelight.

Dreyer won her first publishing award in 1987, being named the best new Contemporary Romance Author by RT Bookclub. Since that time she has also garnered not only six other writing awards from RT, but five RITA Awards from Romance Writers of America, which secures her only the fourth place in the Romance Writers of America prestigious Hall of Fame. Since extending her reach to suspense, she has also garnered a coveted Anthony Award nomination.

Eileen is an addicted traveler, having sung in some of the best Irish pubs in the world, and admits she sees research as a handy way to salve her insatiable curiosity. She counts film producers, police detectives and Olympic athletes as some of her sources and friends. She's also trained in forensic nursing and death investigation, although she doesn't see herself actively working in the field, unless this writing thing doesn't pan out.

Kim:  Where do you keep the RITAs?

Eileen:  Actually, they're on a bookshelf in my office. Now, to be specific, it's the office where I store my research and do business. I have another little cubby where I write, because I found that when I tried writing with my awards sitting over my shoulder, they had a disconcerting habit of chuckling evilly whenever I got stuck. Kind of like, “Yeah, you thought you were so good, romance girl.” So now they laugh at my research books, and in my cubby I can't hear them.

Kim:  What Olympic sport would you be best suited to win a RITA, er, Gold?

Eileen:  I just heard my parents whimper in my head. I come from a family with five boys and athletes all around. My mom and dad coached us all in sports when I was a kid. My mom tried to teach me tennis and my dad tried to teach me golf (that experiment failed when I sent him to the ER for stitches with my backswing). And while my mom had to have me on the softball team for my unnatural ability to hit a ball (my legit batting average was in the .700s. I couldn't hit for power, but I could always dink the ball over the infield. I was lead-off hitter for five years), she put me in short-center so all the other girls could support me. I can catch a ball, but when I throw, even my four-year-old grandson says, “Oh, grandma.”

And that was as close as I got to being athletic. I was even called The Klutz in theater and asked never to dance. So I guess if they had reading, acting, singing or gardening in the Olympics, I might stand a chance to even be at opening ceremonies (I did sing the National Anthem at a minor league baseball game once—it was one of the coolest things EVER). Otherwise, my sport is watching the Olympics from my living room.

Kim:  Which movie director would you like to direct what book from your penned books?

Eileen:  Ooh, that's a good one. If I were to film any of my medical-forensic suspenses, I'd definitely want Christopher Nolan (Memento, Dark Knight, The Prestige—maybe he could also get Hugh Jackman to star...). He just has the touch for suspense.

For my historical romances, I think that the most filmable would be my first Drake's Rakes book, ONCE A RAKE, since it begins on the Eve of the Battle of Waterloo and I'd love to see that filmed. If David Lean was still directing, I'd ask him (think Lawrence of Arabia). But since Tom Hooper is directing now, I'd ask him (who did not only HBOs John Adams, but King's Speech and Les Miserables—which shows he can do scope. And might talk Colin Firth into starring as Jack, although really Hugh Jackman is Jack). If I filmed my newest book, TWICE TEMPTED, I'd ask Neil deGrasse Tyson because astronomy and science are at the heart of my heroines's lives—and I have a mad science crush on Neil deGrasse Tyson. I think he'd love to direct a movie that highlights the contributions of women to astronomy in the late 18th and early 19th century, and Fiona and Mairead Ferguson are not only witnesses but pretend participants. As for the nefarious spies chasing Fiona and Mairead and the lovely relationships they form with Alex Knight and Chuffy Wilde (yes, those who've followed my Rakes, Chuffy is one of the heroes), I figure Tyson is smart enough to ask help from Nolan (and could get Hugh Jackman, although Alex is really Richard Armitage) and maybe Jon Turtletaub, who directed one of my very favorite romantic movies, While You Were Sleeping. Easy, huh?

Thanks so much for inviting me to play. This was fun!  If you want to know more about the research for Twice Tempted, it's going up on my website eileendreyer.com.

It feels like a lifetime ago that Alex Knight saved Fiona from certain doom . . . and stole a soul-shattering kiss for good measure. Wanting nothing more than to keep her safe, he left her in the care of her grandfather, the Marquess of Dourne.

But Fiona was hardly safe. As soon as he could, the marquess cast her and her sister out on the streets with only her wits to keep them alive.

Alex has never forgotten that long-ago kiss. Now the dashing spy is desperate to make up for failing his duty once before. This time he will protect Fiona once and for all, from a deadly foe bent on taking revenge on the Ferguson line-and anyone who stands in the way . . .

I am giving away a print copy of TWICE TEMPTED to one randomly selected commenter.  To enter the giveaway,

2.  Comments are open through Saturday, November 29, 10 pm in Baltimore.

Posted by Kim in Baltimore at 9:48 PM