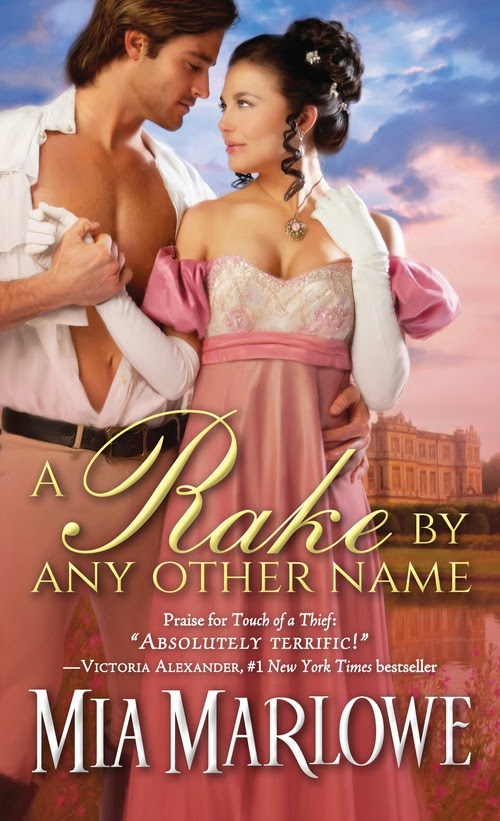 Mia Marlowe joins us today to celebrate the release of A RAKE BY ANY OTHER NAME:

Mia Marlowe is a rising star whose Touch of a Rogue was named one of Publishers Weekly‘s Top Ten Best Romances for Spring 2012. Mia learned about storytelling while singing professional opera. She knows what it’s like to sing a high “C” in a corset, so she empathizes with the trials of her historical heroines. Mia resides in Boston, Massachusetts. For more visit www.miamarlowe.com.

Kim:  Congratulations on your RITA nomination earlier this year! I was rooting for you in the audience! Can you share a special moment from that magical night?

Mia: Thanks so much, Kim! It was very special to have Plaid Tidings nominated for the award. My special moment actually came before the ceremony though. My wonderful editor at Kensington, Alicia Condon, took me out for supper at the historic Menger Hotel. This architectural gem was opened in 1859 and has served such famous folk as Theodore Roosevelt and his Rough Riders. Served with timeless elegance, the meal was to die for!

Kim:  I am excited for your Somerfield Park series! Where did you find "research" for the Edwardian era?

Mia: Actually, even though Downton Abbey inspired this series, the setting for Somerfield Park is still my beloved Regency—1817 to be exact. 1816 was known as “the year without a summer” due to a massive eruption of a South Seas volcano which impacted the world’s climate. It also caused the Barrett family, who own the 100,000 acre estate to suffer a devastating financial setback when none of their tenants could harvest a crop or pay their rent. Add to that an unfortunate investment of the rest of the marquessate’s funds in a whaling vessel which sank in a squall and you can see why Lord Somerset needs his son and heir, Richard to marry exceedingly well.

Kim:  From the book blurb for A RAKE BY ANY OTHER NAME,

And Miss Goodnight isn’t too keen on becoming Somerset’s purse with feet, so she foils their families’ attempts to throw her and Richard together at every turn.

I am laughing already! From where does Miss Goodnight get her grit?

Mia: Sophie was raised in India, where her father made his fortune, so might have picked up a few unusual ideas. Such as, tiger hunts are far more fun than sipping tea in a doily-laden parlor!

Kim:  Yet I suspect that the hero, Richard Barrett, Lord Hartley, has a few noble qualities. How does he stand out among the ton?

Mia: The Barrett’s are not noted for their demonstrativeness, but Richard is fiercely loyal to his family. As his father recovers from a tumble off the manor’s roof, he takes the reins of the estate and tries to solve their financial woes in a way that doesn’t involve him marrying for money. Of course, it’s the done thing when a titled family finds themselves with pockets to let, but Richard isn’t ready to be bought by Sophie’s staggering dowry.

Not even once he falls in love with the lady for herself.

Kim:  What's next for Mia Marlowe?

Mia: The second book in the Somerfield Park series is coming out next May—Never Resist a Rake. Lots of characters from book one return in this story—Porter, the bashful under-butler, and Mrs. Culpepper, the cook he’s smitten with, as well as Sophie and Richard. And I don’t think I could keep the Dowager Marchioness from butting into any book set in Somerfield Park if I tried!

Then in July 2015, I start a new series called the Order of the M.U.S.E (which stands for Metaphysical Union of Sensory Extraordinaires!) It’s sort of a “Leverage” style group of psychics who stand as the first line of defense against objects of a malicious bent being sent to harm the royal family. The Duke of Camden, who heads the Order, believes one must have slipped by them and is responsible for King George III’s periodic descents into lunacy!

If you’d like to be notified when my books come out, please sign up for my newsletter at miamarlowe.com!

Thanks for having me today, Kim! 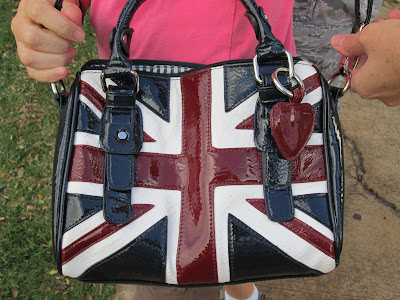 Mahalo, Mia, for your always enchanting visit!  Given the multiple references to "purse", I share this picture with you!

I am reading (and loving) A RAKE BY ANY OTHER NAME:

A Reluctant Lord. A Resistant Lady. A Superfluous Fiancée.

And a Devastating Family Secret…

When Richard Barrett, Lord Hartley, is abruptly called home to take the reins of the estate, he discovers the extent of the family’s financial straits. The remedy: marry the heiress their families have picked out for him. Unfortunately, he’s already planned to marry someone else.

Miss Sophie Goodnight isn’t too keen on becoming his purse with feet…and she sabotages all attempts to woo her. But when Lord Hartley discovers the shenanigans in his father’s past, he realizes that deciding between two beautiful women is the least of his problems.

a Rafflecopter giveaway
Posted by Kim in Baltimore at 7:39 PM