Aloha to Sharon Hamilton and SEAL's PROMISE, Book 8 of the SEAL Brotherhood 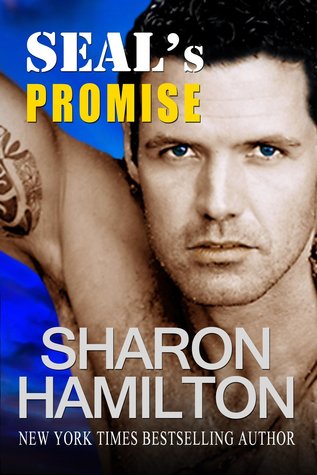 On Veterans Day, I toured the US Naval Academy in Annapolis.  Later that night, I watched the PBS special, NAVY SEALS - THEIR UNTOLD STORY.  From this link,

Narrated by Gary Sinise, Navy Seals – Their Untold Story recounts the ticking-clock missions of the “Commandoes of the Deep” through firsthand accounts — including that of a D-Day demolition team member — and through never-before-seen footage, home movies and personal mementoes. Admirals, master chiefs, clandestine operators, demolitioneers and snipers all reveal how U.S. Navy SEALs morphed into the SEALs.


I recommend readers check their listings for any rebroadcast of this excellent special - I asked Santa for the DVD.

Sharon Hamilton joins us today to celebrate the release of SEAL's PROMISE, Book 8 of the SEAL Brotherhood:

Special Operator T.J. Talbot, raised in a string of foster homes and nearly tossed from the Brotherhood, is forced to make a deathbed promise to care for his best friend’s wife and baby. At home, Shannon Moore wants nothing to do with the community or anything that reminds her of her fallen SEAL husband, until fate steps in to show her she is still connected, and needs the love of this flawed warrior who shares her grief.


Kim:  We met at RT14 in NOLA. Can you share a favorite momemt from the convention?

Sharon:  A great fangirl moment for me was meeting Suzanne Brockman, and having her know who I was. She was gracious to sit and have coffee with us, and discuss her books and what she was working on. I got the idea of the “smacktalk” the SEALs like to do in my books from reading her. Loved the irreverence they had, but still showing respect. This is what I try to portray.

Kim:  What inspired you to jump into self pubbing? If you could go back in time with the knowledge you have gained, what advice would you give yourself at the start of that journey?

Sharon:  That would mean I would have been a terrible mother and wife! This writing thing came on me later in life. I like to think it brings me the thousands of stories I heard, told, lived during my successful 2 prior careers and in raising a family (and some would say a husband). So, I would have started sooner.

The other part of me says the books wouldn’t be as rich or as heavily laden with details from my growing imagination. Yes, my imagination is growing, not shrinking.

I wouldn’t have wasted basically nearly 3 years searching for another route to publication. I should have listened to my friends quicker. Could have shaved off maybe a year or two of my journey.

As far as advice, I would have been kinder to myself in the beginning, instead of doubting everything I did. Once I found my “voice” it was like blowing the doors off the plane. I was freefalling! Skydiving!

Kim:  What unusual tidbits have you learned about the Navy and/or SEALs as part of your research?

Sharon:  I’ve gone back and forth on all sorts of things I’ve learned about them. Good or bad is the fact that there is so much more written about them. I tried at first to go for accuracy, and then, I decided to just make things up. I make no apology for doing that. There are no military secrets in my books. These just try to tell a story based on the characters I have been lucky enough to associate with. They are the finest men on the planet, IMHO. No military rivalry here, just my own personal opinion.

They are loyal to a fault. And they stick so close together, just like in this book, it isn’t unusual for a teammate to marry the widow of a fallen SEAL. That’s what this book is about. What happens when he dies, leaving her 6 months pregnant. The hero makes a deathbed promise to take care of them, but the dying SEAL’s wife hates him in the beginning of the book, which of course brings nice conflilct!

Kim:  Tell us about your series and your new release.

Sharon:  This is about the deathbed promise made. It is about a throwaway guy, raised in foster care, never having a family or anyone who showed any special interest in him, and becoming part of the family of SEALs, in that great tradition. Caring for teammates like true brothers, perhaps better than brothers he would ever have in real life. And the changes it makes to him as he discovers he is not a discarded, throwaway human being. That not only is he a bad-ass fighting machine, he’s a worthy husband and father.

Mahalo, Sharon, for joining us!  I am giving away Navy swag to one randomly selected commenter.  To enter the giveaway,

1.  Leave a comment about what you think you know about Navy SEALs.  I know USS Michael Murphy, now in Pearl Harbor, is named for the Navy SEAL who was posthumously awarded the Medal of Honor for his valor during Operation Red Wings.

Posted by Kim in Baltimore at 9:26 PM