Are you ready for Big Sky Pie?  Piping hot and available now ....

Montana real estate agent Quint McCoy will tell you that the most important thing is location, location, location. It's a lesson he learns all too well when he goes incommunicado for a four-week fishing trip to Alaska. While he's away, his mother Molly turns his office into the pie shop she has always dreamed of, Big Sky Pie. But that's not the only surprise in store for him.

On her way out of town, Callee McCoy only wants to say a fond farewell to her beloved mother-in-law. But Molly soon persuades Callee to stay and lend a hand at the new shop, even if it means heating up the kitchen with her soon-to-be ex. As Callee and Quint rediscover their recipe for love, they realize that some couples are so sinfully good together that one delectable taste is never enough. 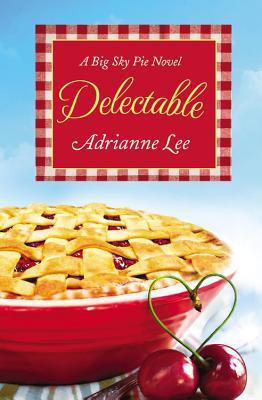 Adrianne Lee lives with her husband of many, many years on the beautiful Olympic Peninsula in Washington State in a pole barn building her husband transformed into an upstairs apartment with a shop below for his hot rods. Adrianne creates her stories on her laptop, in her recliner with her adopted cat, Spooky, curled between her calves, snoozing. Over thirty years of summer vacationing in the Flat Head Lake area near Kalispell and Glacier Park has given her a love for all things Montana.

She wiped her hands on the chef coat and then gripped the handles of the marble rolling pin. They felt like ice against her hands, while Quint’s breath felt like a summer breeze on the back

of her neck. He said, “Okay, now start at the center and roll toward the edge, keeping the pressure even.”

She started, then inexplicably froze. His hands came down on hers as he leaned over her, their bodies spooned. Her heart began to race. His cheek touched hers, his mouth near her ear, his voice husky. “Keep the pressure even. Like this. That’s right.”

He leaned into her and away from her with each extended roll, his body heat like a comforter she wanted to snuggle. She didn’t mean to nuzzle his head, but she did, and the next thing she knew...

“Oh, God, Callee,” Quint groaned, spinning her into his arms, his mouth finding hers, his body meeting hers. A fiery rain of irresistible sensations washed through her, burning away her resistance. She kissed him with all the need she’d suppressed for months and months and tore at his chef ’s coat as he tore at hers, their lips locked in an ever-deepening reunion. His hands were in her hair, hers were in his. He tasted of red wine and Thai food and smelled even better. Her sweater vanished, followed by her bra, and his shirt, his belt, his jeans. He pulled her naked torso to his, eliciting a gasp of pure pleasure at the ached-for feel of his body. Her nipples were rock hard against his chest, his arousal against her thighs.

She didn’t remember kicking off her boots, or her jeans, or her panties. Every breath, every touch, raised her higher and higher toward the heavens, and she didn’t want it to ever stop.

Quint swept the parchment paper, pie crust, flour, and rolling pin from the island. The ensuing crash brought Callee to her senses with a bang. Dear God, what was she doing? She shoved against Quint’s shoulders, tore her lips from his and pushed him away, panting. “No. No. I don’t want this.”

“Could’ve fooled me.” His words came out in a breathless rasp.

Callee gathered her clothes, tugging them on, humiliation and embarrassment scorching her insides. She glanced at the mess on the floor. It was just like their marriage. It had started out as something wonderful and ended up thrown away. She left him standing there, naked, aroused, and making no attempt to cover himself. He looked perplexed and angry and sexier than any of her memories.
Posted by Kim in Baltimore at 12:00 AM