Aloha to Hannah Dennison and MURDER AT HONEYCHURCH HALL 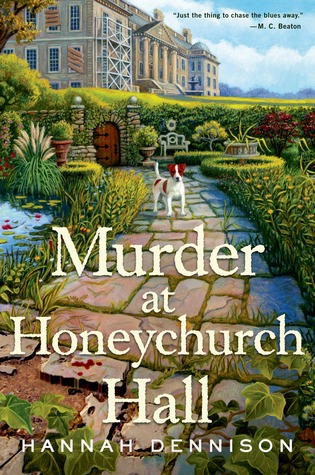 Today I am attending Book Blogger Conference hosted by Sarah Wendell and Jane Litte (link). Blogging has connected me to Romanceland ... and it is a romance blog that introduced me to today's guest, Hannah Dennison.  From her bio,

Born in England, Hannah relocated to Los Angeles with her daughter and two cats to pursue a career in screenwriting. Along the road to publication she has been an obituary reporter, antique dealer, private jet flight attendant and Hollywood story analyst. Hannah is the author of the Vicky Hill Mysteries (Constable UK) and "Murder at Honeychurch Hall" (Minotaur USA), the first in a new series which will be published in May 2014. It will also be published by Constable UK in November 2014.

Now living in Portland, Oregon Hannah continues to teach mystery writing at UCLA, has served on numerous judging committees for the Mystery Writers of America and still works part-time for a west coast advertising agency. She is married to an advertising executive and enjoys hiking, horseback riding, skiing and seriously good chocolate.

Hannah:  The first “old place” that ever captured my imagination was Old Basing House in Hampshire (50 miles south of London). It was the site of a bloody and violent siege fought between the Roundheads and the Cavaliers during the English Civil War. Since the house was razed to the ground, only the ruins and an underground tunnel remained. Today, everything is fenced off but when I was a child, my sister and I used to play among the ruins and dream of knights in shining armor.

In Kent I lived in a sixteenth century farmhouse followed by a short stint in a haunted cottage in East Sussex (about 50 miles to the south-east of London). Both counties are filled with romantic castles. My favorite is Hever Castle where Anne Boleyn (Henry VIII’s unfortunate second wife) grew up. But it’s in Devon where my heart remains (200 miles to the south-west of London)—Agatha Christie country and home to her beloved Greenway. My family moved there when I was 19 and still live there. It’s an extraordinary place steeped in history, magic and mystery—every author’s dream setting.

So … as you can imagine, spending twenty years in Los Angeles where the oldest building dates around 1900 was quite a shock to my system. Even more puzzling is the Angeleno obsession for pulling down the old buildings they do have to build even newer ones. I suppose it’s because Los Angeles is a place where people can reinvent themselves. I know I did! I’m still finding my way around Oregon but I love Portland. It feels a little like home and does boast of having a handful of homes built circa 1880s.


Kim:  How do the Oregonians react to your English accent?

Hannah:  I’m always asked if I come from Australia. It’s rather like someone from South Carolina being asked if they are from Boston. Our accents couldn’t be more different! I’m going to see if I can give you an example phonetically. “Good day,” (English – rhymes with pay) “Good die” (Australian, rhymes with pie).

Kim:  What did you learn from writing your Vicky Hill series, including reader feedback?

Hannah:  When I wrote the first Vicky Hill mystery I didn’t expect it to become an ongoing series. I quickly realized how important it was to keep a big bible with all the details of my characters—ranging from what they eat to what cars they drive; descriptions of places, especially the geographic lay-out of Gipping-on-Plym. But, most of all, to keep track of the story lines, clues and trademark quirky hobbies that appear in each book. I definitely pay attention to reader feedback especially if I have got a basic fact wrong e.g. mixing up a husband and wife! Readers are incredibly perceptive—I love that!

Kim:  Tell us about your new series and new release, MURDER AT HONEYCHURCH HALL?

Hannah:  You could say that I’ve incorporated everything I love and miss about England into my new series. It’s set in Devon and focuses on former TV celebrity Kat Stanford who discovers that her newly widowed mother Iris has recklessly bought a dilapidated carriage house on a country estate known as Honeychurch Hall. Although this is no Downton Abbey and times have changed, a line still exists between those upstairs, and those below. Predictably, the newcomers aren’t popular especially when they discover that Iris has quite a few skeletons in her own closet—one being the fact that she’s been secretly writing racy-bodice-rippers under the pseudonym of Krystalle Storm.

An upstairs-downstairs backdrop wouldn’t be complete without a feisty, octogenarian countess but I also threw in a precocious seven year old who is obsessed with the famous fighter pilot called Biggles, a treasure trove of antiques, the occasional haunting and of course, the paparazzi, who are always hungry for celebrity news. As you can imagine there are plenty of motives for intrigue … and murder.

Yet at the core of my new series is the relationship between a mother and daughter facing new and uncertain beginnings. I’m fascinated by the notion that it’s those who are nearest and dearest to us who are often the most duplicitous of all.

Kim:  What's next for Hannah Dennison?

Hannah:  I have just turned in the sequel to Murder at Honeychurch Hall that will be published in 2015. I’ve also learned that there will be two more in the series so that is very exciting. At the same time, I’m writing a fifth Vicky Hill mystery called Accused! You could say I’m rather busy.

And finally, I’d like to extend a big thank you for hosting me on SOS Aloha today. It’s been great. I do hope you’ll stop by my website hannahdennison.com and visit me on Facebook.

1.  Leave a comment about honey, old buildings, and/or antiques.

Learn more about Hannah and her sisters, er, books at hannahdennison.com.