Aloha to Theresa Romain and TO CHARM A NAUGHTY COUNTESS 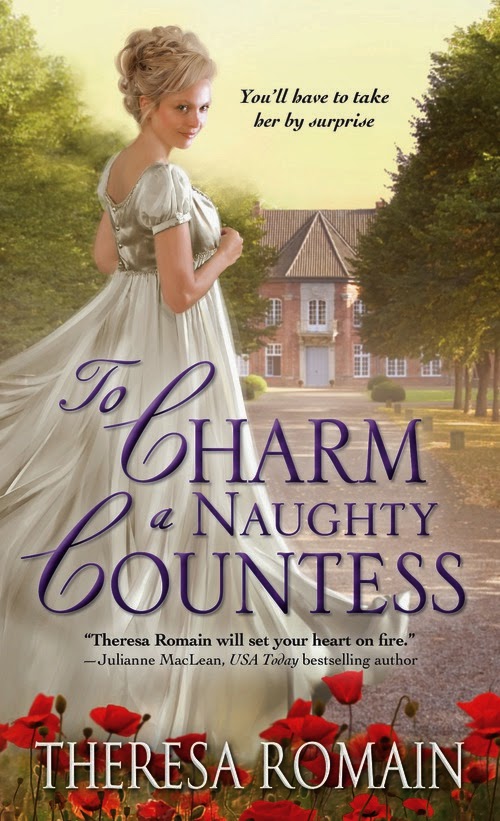 It is my distinct pleasure to welcome Lady Stratton from TO CHARM A NAUGHTY COUNTESS:

Brilliant but rumored mad, Michael Layward, the impoverished Duke of Wyverne, has no success courting heiresses until widowed Lady Stratton takes up his cause—after first refusing his suit. Caroline Graves, the popular Countess of Stratton, sits alone at the pinnacle of London society and has vowed never to remarry. When Michael—her counterpart in an old scandal—returns to town after a long absence, she finds herself as enthralled with him as ever. As she guides the anxiety-ridden duke through the trials of London society, Caroline realizes that she’s lost her heart. But if she gives herself to the only man she’s ever loved, she’ll lose the hard won independence she prizes above all.Kim:  Aloha, Lady Stratton. I appreciate you joining me for a cozy chat. How do you take your tea? Would you like a sweet treat, too?

Lady Stratton: Thank you for inviting me to call, Kim—may I call you Kim? I so often have callers at my home that I don’t get to venture out to meet friends as often as I’d like.

I take my tea with a bit of sugar. And I would adore a sweet treat; thank you. Do you have any lemon tarts? Those are my favorite, and the last time my cook made them for callers, they were all gobbled up before I got a single bite.

Kim:  What is your favorite activity in town?

Lady Stratton: It used to be collecting suitors around me; they were amusing enough to pass the time. I knew they didn’t take me any more seriously than I took their regard: all they wanted was my fortune.

Lately, I’ve been helping the Duke of Wyverne make his way into society. That dratted duke doesn’t care a whit for what he says or does, and it’s taking all my skill to polish him up so he can find a wealthy bride to save his dukedom’s fortunes.

Because I want him to find a bride. I really do. I’ve known him for years, and I wish him all the best. Really.

Kim:  Why do you treasure independence above all?

Lady Stratton: I sacrificed a great deal to achieve it. In my debut season, I almost lost my reputation—again, that dratted duke was involved. I clawed myself into respectability by intriguing an earl old enough to be my grandfather, and I married for gain. It was a friendly enough marriage, but not the love affair of a maiden’s dreams. Now that I’m a widow at the pinnacle of society, I won’t sacrifice myself again to anyone else’s whims.

Kim:  What attracts you to Michael Layward, The Duke of Wyverne?

Lady Stratton: Did I say I was attracted to him? I believe I only admitted that I wished him well. And that he was a dratted duke, which anyone would know who spent more than 15 seconds in his company.

But if I were attracted to him—or had nourished a secret love for him for eleven years, which I am not saying I did—it would be because of his curious mind, always hopping from one idea to the next. Or his blunt-spoken ways, which let one know exactly what he’s thinking. Or his eyes, which are an unusual shade of dark green—and when he fixes them on me, I feel as though I have his full and undivided attention.

I could go on, but I need not. Because I am not in love with him. The only reason I remember him so well is because there is no one else quite like him.

Kim:  I love the gown on the cover of TO CHARM A NAUGHTY COUNTESS. If you could design a gown for your creator, Theresa Romain, to reflect her personality, what color would it be?

Lady Stratton: Must I? Miss Romain is a sad disappointment when it comes to fashion. She wears trousers and spectacles on a regular basis, and she doesn’t keep a single lady’s maid. She also insists on wearing black clothing, though she is not in mourning. I cannot comprehend her tastes at all.

I suppose I might coax her into a front-fastening gown she could put on herself. Something in a light muslin, perhaps a dove-gray shade. She does admit that she thinks my gown is very pretty (and I am glad you think so too—thank you!), so we may yet convince her to wear silver silk. 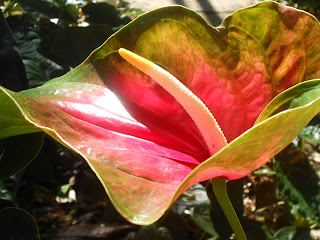 Mahalo, Lady Stratton, for sharing your insight to society, the Duke of Wyverne, and Theresa Romain.

Historical romance author Theresa Romain pursued an impractical education that allowed her to read everything she could get her hands on. She then worked for universities and libraries, where she got to read even more. Eventually she started writing, too. She lives with her family in the Midwest.

Sourcebooks is giving away a print copy of TO CHARM A NAUGHTY COUNTESS.  To enter the giveaway,

1.  What flowers would you like on the cover of your own romance novel?

2.  Sourcebooks giveaway is open to residents of the US and Canada.

Learn more about Theresa and her books at theresaromain.com. 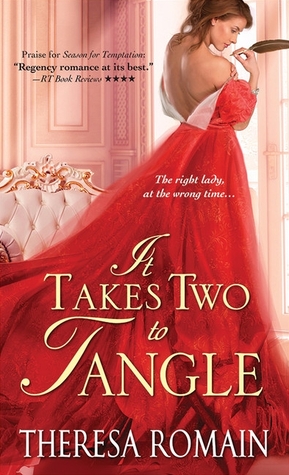